Bindi the rescued musang baby (masked palm civet) has taken over our hearts and is a solid member of the family now. 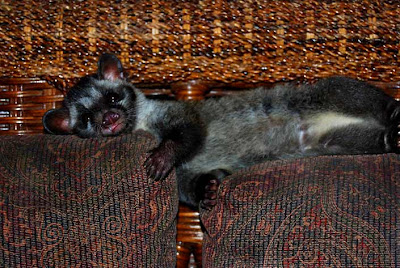 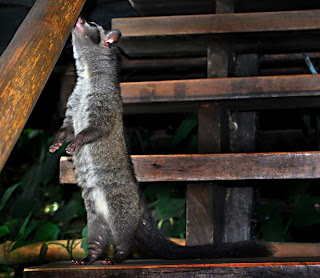 Bindi is two months old now and I have been giving her a lot of freedom to hang out with me during the day. Not once today did I put her in her own habitat. She explored my office and our living quarters, leaped onto my shoulders and on to her sleeping ledge, then took a nap.

I brought her up to Dave's internet hut on the hill and she decided to take a nap on his desk up there. Dave will bring her down.

She's quite the member of the family and such a fun and interesting creature. She took off with a good portion of Christmas dinner and I had to chase her for it. She devoured a good portion of it and seems to have grown a lot more after having eaten so much protein.

It's taken a while for our dogs, cats, rabbits, myna birds and hand-raised a chicken to get used to each other, but there seems an amicable truce of late. I wouldn't trust Bindi the civet in the cage at night with the birds, nor perhaps the rabbit when she matures though.

Sometimes this type of civet is called a "toddy cat" because it loves to eat the sap of the Toddy Palm. We don't have any of those, but we do have a lot of Buko juice or coconut water. It's the water that comes out of a green coconut and full of enzymes and minerals. Bindi loves this stuff and will drink, run around, drink run around. She just can't stay away from the bowl of buko juice when we put it out.

She likes to eat mangoes, bananas, sometimes papaya sometimes not. She loves turkey and hot dogs, which we found out when she jumped onto the table and grabbed them off our plates.
It's hard to believe that people eat these adorable creatures around here. Hopefully they will get to know Bindi and she will teach them that they have a right to live too. Also their value to the environment, not to mention that they have also created the Civet Coffee market and created jobs for many farmers. They sell the beans that the civet has excreted, after having eaten the choicest, ripest coffee berries. The scat is harvested as a clean bean without the coffee berry fibers, since those are processed by the civets stomach! The beans are roasted are are the most expensive coffee beans sold in the world today selling at up to 100.00$ USD per pound.  The coffee is also known in the Philippines as Kape Alamid, in Indonesia, Kapi Luwak.
Posted by Diana J. Limjoco at 12:26 AM 3 comments:


We were blessed when Bindi, our musang (masked Asian Palm civet), came by chance into our lives as a rescue at 3 days old. We had never heard of a musang before Bindi. Mainly what they know or show off in Palawan, is the Palawan bearcat, which we thought Bindi was as first. Later we learned she was a civet, smaller than a bearcat and their scat is harvest by coffee farmers and the coffee bean excreted is one of the most expensive in the world, called Civet coffee or Kopi Luwak.
http://youtube.com/c/ottermom
https://www.facebook.com/palawanotters
http://instagram.com/palawan.otter.mom 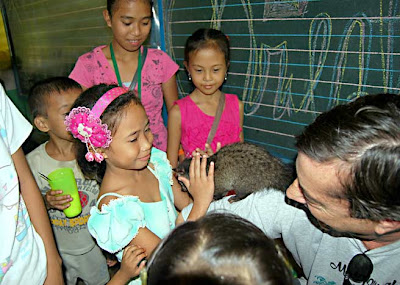 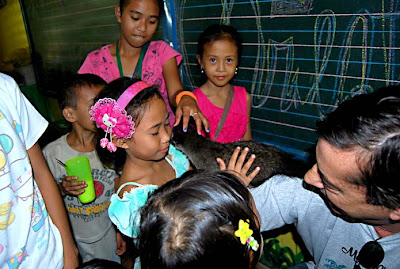 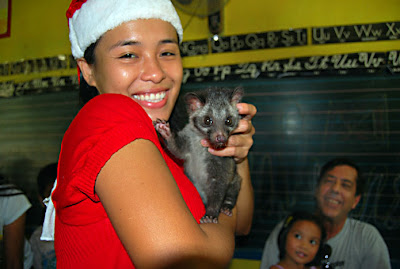 We just simply love her. She's so loving and fun and interesting. It's the first wild creature I have raised. I had to give her milk every hour for the first three weeks at night, so I didn't get much sleep taking care of her. Now she eats fruits like bananas, mango, and papaya.

I found out that some villagers eat musang here, so we brought Bindi to the school where our worker's children attend to teach the children to love these creatures but not eat them.

I believe everything comes into our lives for a reason. Bindi has opened my heart in many ways and so I am using her to teach the love of her kind to others in our village who don't know better than to eat them.

We were given a 3-day old musang (common masked Asian civet cat) by a local villager here in Puerto Princesa, Palawan, Philippines. He said that its mother was chased off by dogs in its village and they didn't know how to feed it, so they gave it to me. We have so many animals on our property that I suppose they felt I could do it justice.  We called her Bindi, which means Little girl in the Australian aboriginal language. And she's really our little girl.

After doing extensive research on the internet I found out that giving it infants formula would work for a Palawan bearcat since there wasn't anything specific for Musangs. It seems to have worked since she is almost 2 months old now and very healthy and strong.

When we got her, she couldn't really see well or hear anything at all. It was easy to carry her around in a basket as she wouldn't leave.  I had to wake up every 2 hours or so to her wailing for milk. I didn't get a lot of sleep for the first month.

She is now just under 2 months old. Still adorable and loves to play and explore everything.  Sunlight to Bindi is like Kryptonite is to Superman. When she tussles and plays during the day, her little bites don't hurt (well they do a little as she still has little "puppy teeth" as it were).  Once night falls, the power of darkness turns her into a raging terror. She bounces off the wall, climbs anything insight and her nips are stronger and really hurt with those needle-like teeth and claws.  Although still playing, it's like the darkness brings out her wild side...she is, after all, a wild creature and naturally nocturnal. 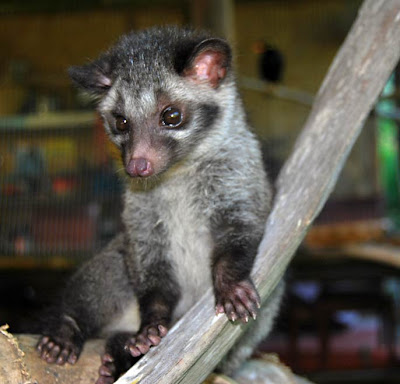 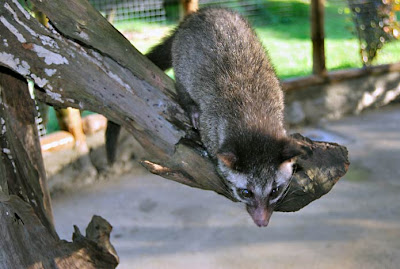 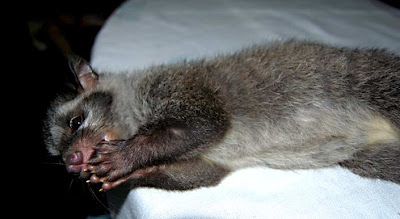 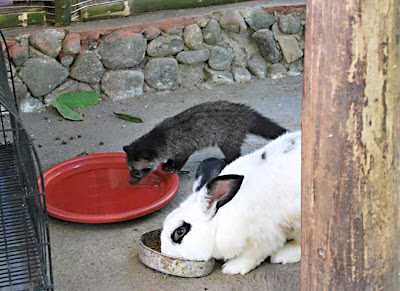 We found out that releasing her into the wild here won't be doing her any favors as the locals actually eat them, and she won't know how to fend for herself. At just under 2 months old she's already attacking the myna birds in the animal enclosure we built for her and them. Obviously, we will have to build a partition for the birds and even the rabbit who she is already trying to wrestle with!

Will Bindi make a good pet? So far she is, but she is just under 2 months old.  I have joined a FaceBook group all about musang lovers and it shows photos of people walking them on leashes during the day, but it's all in Indonesian so I don't understand a word. One friend of mine got a musang when it was already grown and she took it everywhere on a leash, but at night it also becomes fierce and they couldn't deal with it and wound up giving it away.


It turns out, this particular civet is the one which loves to eat coffee berries, and inside its intestines, the pulp is removed leaving the coffee bean exposed. The scat is then collected, washed and roasted! It's the most expensive coffee in the world at the moment going at up to 100.00 USD per CUP! I have never tried this type of coffee, nor am I inclined to at that rate, but there are those that swear it is really different and not bitter, and some (most) can't tell the difference. We aren't raising her for this purpose and only found out all this information after rescuing her. It's just an interesting side note. You can watch a video on YouTube about civet coffee here.

The nice thing about building Bindis' habitat is that the bamboo came from our own grove and the rocks from our own creek. So it's a bit sustainable! We like to be earth friendly around here.

Bindi cannot be returned to the wild, as civets need the mother to show it what to eat. 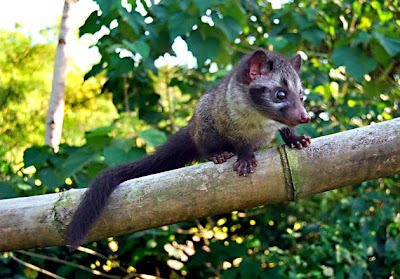