Our continued adventure with the Palawan musang 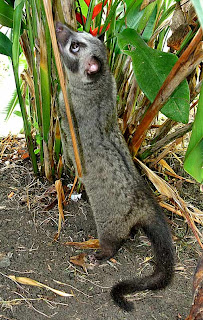 Bindi the masked Asian palm civet has become such a part of my daily routine. Every morning as soon as I get my coffee, I go into the animal enclosure where she awaits pacing back and forth in her night-time cage waiting for our daily walk. She loves to climb the large bird of paradise stalks. She explores everything.

Even after 8 months with us, she still gets quite nippy at night when her natural nocturnal hunting instincts kick in.

During the day I let her roam about the various outdoor living areas and outside of the animal enclosure. She never runs away, but I do keep a watchful eye on her so that she doesn't get into any mischief or eat any of the free-ranging various sorts of poultry running about the property and in close proximity to her. She doesn't bother with the grown chickens but the baby chicks and ducks test her hunting instincts and she did once pounce upon a hapless duckling in its cute fluffy yellow phase and it did, unfortunately, die of its injuries.

Most of the locals are afraid of them when grown as they do have needle sharp claws and teeth even more so. I've heard of two that were found in a house in town and summarily killed instead of being captured and released elsewhere more suitable to their wild nature. Being omnivores the wild musang will hunt free ranging exposed poultry. Another reason the locals kill them, they consider them a pest and they like to eat them as well.

Check the archive menu if you want to find out more about how we acquired Bindi the masked Asian palm civet.
http://youtube.com/c/ottermom
https://www.facebook.com/palawanotters
http://instagram.com/palawan.otter.mom

Posted by Diana J. Limjoco at 7:53 PM No comments: